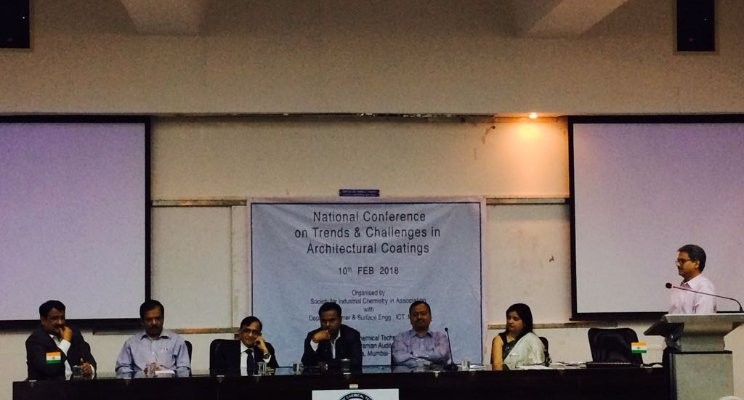 I was invited as a panelist by Society for Industrial Chemistry (SIC) for one day seminar organized by them at Institute of Chemical Technology (ICT) auditorium, Mumbai earlier known as UDCT. The theme of the seminar was, ‘Trends and challenges in architectural coatings’. Few presentations were very interesting – High performance painting solutions for high rise buildings, painting on wet surfaces, protective coatings etc.

The architectural coatings industry has undergone great change over the last ten years. It will not be an exaggeration to say that paints and coating market, has influenced Indian architecture and made it colourful. The coatings that we get today have a much different raw material base and different environmental properties than what we used to get few years back. Few of the significant changes have been, the conversion from oil-based to waterborne paints, VOC reduction, removal of unsafe chemicals , the emergence of paint-and-primer-in one products, improved film properties such as dirt pickup resistance and rain resistance, and easy-to-apply new looks. These changes have been brought through, by various influencers such as synthesis chemists, paint formulators and end users. They have made these ‘Coatings’ formulation very innovative.

Being associated with laboratory design industry for more than 2 decades now, I have closely interacted with paint scientists and their fellow chemists. During the process of lab planning, we get acquainted with their processes and workflow. Architects- being the conceptualizer’s, I would refer them as the first user’s or consumers to such colourful products. However it is not always that a consumer gets an opportunity to know and understand the operations behind these innovations.

When we set up labs for paint scientists, they are the users and we are the creators. Listening to the day long presentations made me feel that they are the creators and we (architects) are the primary users. I think the confluence was an excellent platform, for the creators of both the worlds to interact, exchange, understand how the thought processes are and how we can be influencers and users-both, for each other’s industry.

This reminds me of a quote by famous scientist, inventor, engineer & innovator Mr.Graham Bell…..

“I never knew how to invent electricity, but I was interested in using it for other innovations. So I found someone who did…And in such divine intervention I found a genius named Nikola Tesla”. With 700 patents to his name, Nikola Tesla is one of the greatest inventor of all times and more known for his innovation of alternative current. The way Bell could innovate on the foundation of electricity, architect make your work space aesthetically beautiful with the innovations in colours.

This quote is very much apt when it concerns art and architecture. Colours are the creative forms of expression of an artist. For an architect, the joy of using colours in the form of paints, coatings and all such materials as architectural features is extensive. According to me, they add character to our design.